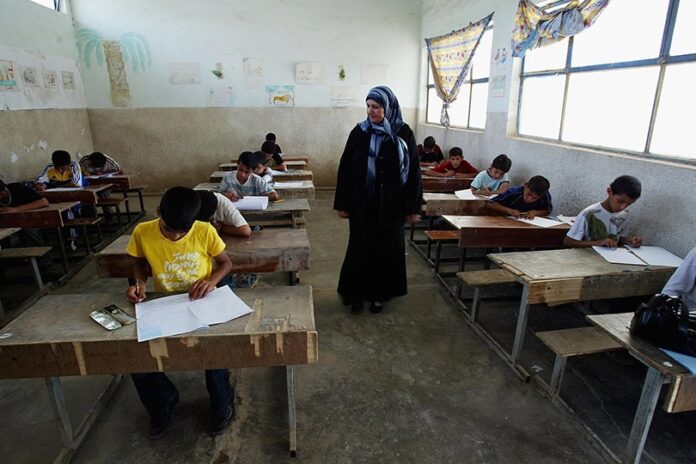 About school buildings, this problem increases annually, with the continuation of the construction movement, but in a manner that is not commensurate with the actual need, and the increase in population ratios means an increase in the number of students entering schools until the number of buildings needed by the Ministry of Education reached 9,000 buildings.

Teaching methods are still traditional; with the tremendous development in technology, the digital revolution, education strategies, knowledge expansion, and scientific transformations, many of our schools still adopt the method of memorization, indoctrination, and retrieval of information when requested, in addition to another aspect represented in adherence to the prevailing patterns in lessons, exams, etc.

Concerning the curricula, which is one of the trinity of the educational process, along with the student and the teacher, it needs continuous review according to a rigorous scientific system. We find that our educational institutions so far rely to a large extent on the old concept of the curriculum, which is interpreted as the content of the textbook only, at a time when the modern concept has become based on the adoption of other elements of the curriculum, namely objectives, teaching methods, activities, and evaluation methods in addition to the content of the book. The current curricula also need to keep pace with the market need.

As for the preparation of educational and teaching bodies, what is noticeable is their need to adopt the rules of preparing the twenty-first-century teacher by adopting modern technologies, admission requirements, faculties’ pedagogical systems, experiences … etc.; As the teacher’s preparation currently does not accommodate all of these conditions.

As for what is related to pedagogical and educational legislation, it has been observed that it is obsolete and needs no less revision after it has become obsolete. Some were issued in the 1970s, with the acceleration of changes in the education sector and the change and development of educational means and systems, and some of them homogenize a previous political, social, and economic system with the change of the comprehensive system politically, socially, and economically, and the development of man himself.

As for what is related to pedagogical and educational legislation, it has been observed that it is obsolete and needs no less revision after it has become obsolete. Some of them were issued in the seventies of the last century with the acceleration of changes in the education sector and the change and development of educational means and systems, and some of them homogenize the previous political, social and economic system, despite the change of the comprehensive system politically, socially, economically, and human development. As is well known, legislation is generated to meet the needs of society.

For all of the above, we seek in this paper to address the problem of education by answering the following question: What are the policies needed to improve the pedagogical and educational reality in Iraq in light of these challenges?

By policies in this paper, we mean All plans, legislation, and procedures for improving the pedagogical and educational reality in Iraq. To answer this question, the paper should be divided into two main axes: The first axis deals with the legislative field. The second axis deals with the pedagogical-educational field, which includes presenting the most prominent challenges that surround the educational process in these two areas, to reach the available options to meet these challenges.

The Iraqi constitution in force in its provisions guarantees the right of children to receive pedagogy and education. Education is considered a basic factor for the progress of society, a right guaranteed by the state, as well as compulsory in the primary stage, combating illiteracy, and making free education a right for all Iraqis in its various stages, in addition to the existence of dozens of legislations that regulate the provisions and conditions of the educational process. Among the most recent of these legislations were the Ministry of Education Law No. 22 of 2011 and its amendments, the Literacy Law No. 23 of 2011, the End-of-Service Bonus Law for retirees before half the year, and the cancellation of dozens of decisions of the Revolutionary Command Council on educational affairs that were exceptional and unfair. As well as granting the powers assigned to the directorates of general education in each governorate to the provincial councils in a democratic and decentralizing step in the administration, and to facilitate and expedite the procedures of the general directorates. As well as the achievements included in these and other legislations, which were pushed by the Iraqi parliament in cooperation with various competent authorities. Such as disbursing financial allocations amounting to 150,000 dinars cut off per month for educators, raising the appeasement of job grades for administrators working in the Ministry of Education, and many activities such as holding conferences, seminars, meetings, and supervisory procedures with various control tools, but with what was mentioned, the ministry faces legislative needs with two dimensions: