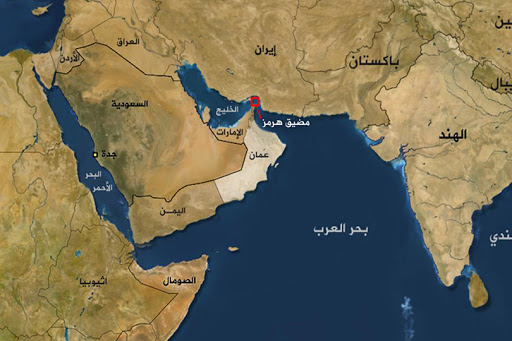 The Strait of Hormuz is of great importance in international trade, shipping, and oil transport. It is located in the Arabian Gulf region. It is the focal point connecting the Gulf to and from the Indian Ocean and to the Globe. Its importance is gained from the presence of the largest oil exporters in the Gulf, from which oil tankers pass and commodities from various regions of the world are received.

The position of Iran and the Sultanate of Oman in the vicinity of the Strait of Hormuz, through which more than 100 vessels pass every day, has given them exceptional importance, Therefore, at times, the security of the Gulf has been linked to the freedom of navigation in the Strait; Because any threat to freedom of navigation will turn the Arabian Gulf into a closed sea. (1)

The Gulf States are keen on freedom of navigation for their economic and commercial interests, particularly with Iranian threats to close the Strait through occasional military exercises. Iran has a high capacity to close down the Strait of Hormuz. It has a base overlooking the Strait in Bender Abbas, as well as important islands nearby, such as Abu Musa, Larak, and Siri Islands. (2) The role of the Omani-Iranian agreement is highlighted in Hermes by reflecting the nature of bilateral relations on the one hand and the strategic partnership on the other. The Sultanate of Oman has acted as a mediator between Iran and Western countries in reaching a historic agreement on Iran’s nuclear program. Oman’s interest in the security of the Arabian Gulf region and the Strait of Hormuz continued through conferences on Arab security, and Omani interest began to unfold in the Strait of Hormuz by asserting that it was part of its sovereignty and had the right to defend the freedom of passage of ships passing through it. (3)

It can be noted that Iran did not threaten to close the Strait of Hormuz during the Iraq-Iran War. It closed it only to the passage of Iraqi vessels. With the increase in Iranian threats and public warnings of closure, the Sultanate felt that Iran was threatening the security of the Strait; This has made the principle that has followed since the 1970s by affirming its sovereignty over the Strait. Freedom of passage is being shaken by the Iranian side, feeling that this is the first disagreement between them to end the long-standing state of understanding in the Strait, particularly under the rule of Sultan Qaboos bin Said. In the view of the Sultanate of Oman, the closure of the Strait by Iran to freedom of passage and navigation would be particularly damaging for Iran, the Gulf States, the United States, and the West. The damage also includes Iran itself. The Sultanate of Oman is striving to keep the Strait out of the American – Iranian conflict, which Iran does not agree with as a means of putting pressure on the United States, on the one hand, and the Arab Gulf countries, on the other.

In our view, the Omani-Iranian understandings about the Strait of Hormuz region not only share the free passage of ships but also share the view that their consent should be taken when any military vessel passes through the Strait under the justification that the area is within the territorial sea and is part of it. (4)

In this context, the Arab Gulf States are trying to involve the United States or the Western States in the Strait issue, because they believe that they will put pressure on Iran and deter it from constantly waving and threatening to resort to the closure of the Strait.

The importance of the passage of ships in the Strait of Hormuz is reflected in the American-Iranian conflict through the importance of the surrounding area, through which American forces enter their bases in the Arabian Gulf and in turn seek to safeguard their interests, the free passage in the Strait of Hormuz and enhance the security of their allies in the Arabian Gulf; Therefore, as part of its conflict with the United States of America, Iran fears its presence in the region, both in the Arabian Gulf and in the Indian Ocean, particularly at the base of Diego Garcia in the Indian Ocean.

The United States highlights the importance of Oman not in securing navigation in the Strait, but in the presence of the United States military bases and Omani ports. One of the most prominent is the Al-Musayra military base, which is one of the most powerful American positioning sites in the Gulf. (5) Underlines the importance of the military base for the protection of the Strait, United States ships, and freedom of passage, Oman appears to be using this base under the ready alternative to face any Iranian threat. It is a direct pressure factor, as well as the presence of other American bases in Bahrain, Qatar, and Saudi Arabia. Within the framework of its own national security, the Sultanate of Oman fears that the understanding with Iran in the Strait will end through the most significant threat to the security of the Strait; Iran’s tanker war in the Arabian Gulf threatens its freedom of passage, and in its understanding with the Sultanate of Oman, Iran unusually seeks to threaten to close the Strait; In order to create an international state of pressure on the United States of America, and to change U.S policy towards Iran, Iran has the capacity to close the Strait, but it won’t, and it uses threats to remind the world and to demonstrate its ability to do so. (6)

Permanent neutrality has been a prominent feature of the Sultanate of Oman throughout the reign of the late Sultan Qaboos. Oman was previously close to Iran. Its mediation of the nuclear program is evidence of the depth of its relations with Iran, with the changes in the current situation in the region, the United Arab Emirates has established formal relations with Israel; The data, therefore, indicate that the Sultanate’s approach, led by Sultan Haytham bin Tariq, who took the throne after Sultan Qaboos’s death, continues with regard to its principles of five decades ago, but perhaps the change in the situation in the Strait of Hormuz may come not with Iran’s ability to close it down as before, but with a larger presence of Israel in the Arabian Gulf region, or with increasing influence for Saudi Arabia either in the coast of Oman and in the Strait of Hormuz, which poses an additional threat to Iran.

The new Sultan Haytham bin Tariq seems to want to balance his relations with Iran, through greater engagement with the GCC States and the consolidation of visions and positions on crises in the region. This, in turn, is reflected in the situation in the Strait of Hormuz. The United States wants to limit Iran’s role both in the Middle East and in the Strait of Hormuz, it wishes to find a radical solution to Iran’s competition in the Arabian Gulf, which is, of course, costly to the United States; it will therefore go to the Sultanate of Oman in order to increase its effectiveness in the supervision and protection of the Strait.