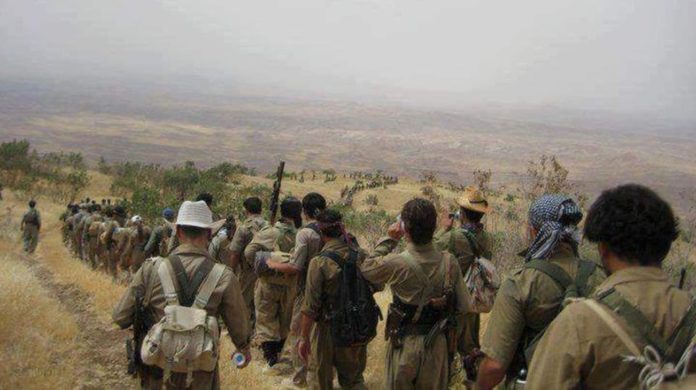 Will the region soon witness renewed Kurdish in-fighting as a result of the recent incursions by Turkey?

The recent airstrikes by Turkish warplanes against Kurdistan Workers’ Party (PKK) positions in the Zeni Warte area[1] coincided with the Kurdistan regional government’s deployment of Peshmerga forces to this area[2]. Zeni Warte, which falls within the geographical area of the Rania district of the Sulaymaniyah Province; a stronghold of the Patriotic Union of Kurdistan (PUK), is located near the Qandil Mountains, long known to be the most prominent sanctuary for PKK militants, is also a link between the surrounding triangular Iranian-Iraqi-Turkish borders.

The presence of PKK forces in the Qandil Mountains, and the free movement of these forces in the border areas of Turkey and the Kurdistan region, has long been a thorn in the side of the Kurdistan government, something for which it has not yet found a cure. The regional government, on the one hand, has been forced to act in a more or less incoherent manner in the face of the presence of PKK forces due to historical Kurdish ties, and yet on the other hand, because of Erbil’s need to maintain its relations with neighbouring Iran and Turkey, it has attempted to follow a policy of silence and acquiescence towards the military and security incursions into the region by Tehran and especially Ankara, in their fight against the PKK.

However, it appears that the recent steps taken by officials in the region of deploying the Peshmerga forces of the Iraqi Kurdistan Democratic Party (KDP) to the Zeni Warte area, which is located 136 km from Erbil, under the guise of controlling and preventing illegal border traffic and in order to prevent and combat the spread of the corona virus pandemic, shows that officials in the Kurdistan Regional Government (KRG), particularly those belonging to the Barzani faction, are seeking to find a way to rid themselves of this thorny issue. However, this step, if taken further, will in all likelihood lead to a widespread conflict and civil war between the Kurds.

In other words, the recent developments in Zeni Warte transcend the differences between the PUK and the PKK with the KDP, with far reaching regional ramifications, some of which are in no small part due to the interventions, provocations and pressures being exerted to protect the interests of certain regional and international countries. Bringing into question the role of the PUK as an aligned force should also be borne in mind. Especially since the federal forces present under the control area did not prevent the KDP forces from entering the Zeni Warte area. On this point, the role of certain neighbouring countries, notably Iran and Turkey, and Ankara’s goading of the KRG in Erbil into sending Peshmerga forces affiliated to the Iraqi KDP cannot be ignored.

Ankara, by inciting the Barzani faction to send the Peshmerga forces to Zeni Warte, in addition to confronting the PKK, Turkey is seeking to fan fires of confrontation between Iraq’s Kurdish factions. Although Zeni Warte is an area where the Turkish PKK forces have long held sway, however, part of this region has been, since late 1994, the scene of conflict and civil war, between the forces of PUK and the KDP, where part of the region was under the control of the Barzani faction and another part  under the control of the Talibani faction. But the point here is that tensions between the two main parties in the Kurdistan region of Iraq have endured despite the passage of time.

At a time when the Kurdistan region of Iraq is facing a renewed security crises caused by the resurgence of Da’esh sleeper cells in the Kurdish areas, especially Kirkuk, and the serious economic problems in light of the budgetary disputes with the central government in Baghdad, and more importantly, the health and welfare crisis in the Kurdish community because of the persistence and possibility of escalation in the spread of the corona virus, all of these matters, have provided a golden opportunity for certain regional power to reinforce the conflict between the forces of the KDP and the PUK around the Zeni Warte area.

Unfortunately, the irresponsible behaviour and the failure to adopt sound political principles by these two parties (namely, the Barzani and the Talibani factions) who in throwing accusations against each other and in mounting media attacks against each other, have brought their outright conflict to the point where many regional experts and observers do not exclude the possibility of another bloody, internecine Kurdish war, similar to the one that happened in the Kurdistan region of Iraq during the 18-year civil war that killed more than 8000 Kurds between 1994 and 1998.[3]

The issues we encountered above remind us that in light of the special considerations and the unusual strategic, geopolitical and geographic importance of the Zeni Warte area, Turkey cannot be indifferent to the lack of security and the intra-Kurdish conflict in this area. This comes against the background of repeated heavy bombings of the Zeni Warte area over recent days. These airstrikes targeted a refugee camp near the town of Makhmour, west of Erbil, on 14th April 2020, claiming the lives of several people as well as injuring several others.[4]

These attacks demonstrate that Turkey plans to destabilize Iraq in general, and especially the Kurdistan region, and her actions go well beyond the mere scenario of igniting an intra-Kurdish conflict. For this reason, all Kurds, especially the Kurds in Iraq, would do well to remember that Turkish President Recep Tayyip Erdogan has previously stated that Mosul and Kirkuk belong to Turkey.[5] Under these circumstances, we must see whether the Kurdish parties, especially the PUK and the KDP, will move towards dialogue, political negotiations and a joint effort to reduce tensions and contain their repercussions, or that these provocations from regional and international players will ultimately lead to an outbreak of a Kurdish-Kurdish conflict, and civil war, and that the region will witness fighting between brothers in the Kurdistan region of Iraq.

[2] Masroor Barzani reveals details of the “Zeni Warte” tension: a group of people within my own party has publicly stood against the government. https://www.shafaaq.com/ar/