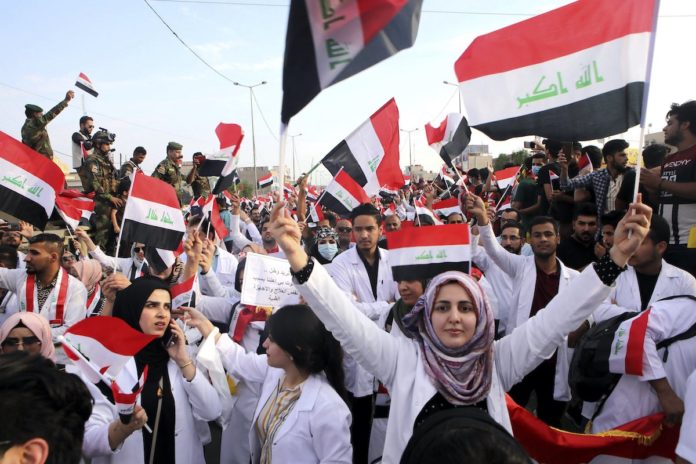 Will Muhammad Allawi’s Government be hammered on the anvil of US pressure because of its possible rapprochement with Iran?

Although the efforts by Muhammad Tawfiq Allawi, the new Iraqi Prime Minister, to form a functioning government have so far been hampered, his negotiations with the various political factions continue apace with the aim of completing the process of forming the new government.

While Muhammad Tawfiq Allawi is still working on forming an interim government with the assistance of Iraq’s leading politicians and political alliances, elsewhere and in light of Iraq’s current circumstances, the United States, on 12 February, 2020, issued an official statement through its Department of State, renewing Iraq’s exemption from US sanctions against Iran in the energy sector for another 45 days[1]. In addition to this measure, and only after 72 hours from the White House announcement of this exemption, US Secretary of State Mike Pompeo explicitly warned the Iraqi government against the continuation of rocket and mortar shell attacks on  American military bases and compounds in Iraq by Iran’s proxy militias. Pompeo stated that the Iraqi government will forgo this exemption if it fails to comply and further stressed that this warning was mainly directed at the government of Muhammad Tawfiq Allawi.

The question that now arises: Is the United States, by making this threat whilst also offering inducements to the Iraqi government, seeking to steer the new Iraqi prime minister towards a confrontation with Iran or at least to prevent Muhammad Tawfiq Allawi’s rapprochement with Tehran?

To answer this important question, we must make certain admissions: conditions in Iraq in the wake of the onset of popular protests in early October 2019 have shown little or no improvement in living standards, economic propsperity or political reforms. In fact to the contrary, the rate of Iraq’s need for energy resources, including gas and electricity imports from Iran, which are the bedrock for stability, has increased.

Accordingly, the United States, despite its avowed intentions, is obliged to extend the exemption for Iraq, in order for the latter to import energy from Iran. Regarding the threat which US Secretary of State Mike Pompeo launched against Baghdad, it is believed that this posuring by the head of the US diplomatic service is an effort to secure guarantees from the new government for the protection of US military bases and personnel against further missile and mortar attacks by Iranian backed factions, and not a threat to end Iraq’s exemption from the sanctions against Iran.

In light of the foregoing, if we take the threats of Mike Pompeo and the White House against Baghdad seriously, alongside the possible termination of the exemption for the supply of energy from Iran if rocket and mortar attacks continue against the US forces in Iraq, then the US Treasury will take all the necessary measures to seize Iraq’s assets including all the cash deposited in US banks. This will inevitably lead to the downfall of Allawi’s fledgling government. This in turn will lead to the handing over of the reins of power to yet another interim government that will in all likelihood adopt a far more confrontational approach with the US and put on its agenda the removal of US military forces from Iraq. Relations between Washington and Baghdad will undoubtedly become even more  strained and reach their lowest ebb. Consequently, US President Donald Trump will not seek to burn all his bridges with Iraq, especially with the upcoming presidential elections on the near horizon.

Another question arises here: the previous waiver from sanctions for energy imports  granted by the US Treasury to Iraq was for a period of 90 days.  So does shortening the period of the waiver from 90 to 45 days indicate that the US is seeking to limit Iraq’s dependence on Iran by cutting gas and electricity imports gradually?

No doubt these measures are merely political strategems, aimed at putting pressure on the Iraqi government. In any event, Iraq will need more than 45 days to secure its energy needs from other sources. It will not be possible or even realistic to expect Iraq to cut its imports of gas and electricity from Iran either in the short term or even in the medium term.

In light of the tensions between Tehran and Washington following the American airstrike on the perimeter of Baghdad airport which led to the assassination of Iraq’s PMF deputy leader, Abu Mahdi al-Muhandis, and the commander of Iran’s Al-Quds Forces, Qassim Soleimani; and the Iranian response which targeted US bases in Iraq at Ain al-Assad and Erbil, administrating the government in Baghdad has become extremely complicated. Hence, Muhammad Tawfiq Allawi and his new government are in no position to ignore the status quo in Iraq or the  wider region, including the thorny issue of removing American military forces from Iraq.

Under these circumstances, the new government has no option but to take the realities on the ground into account. Any efforts made to confront or ignore the new status quo by the new government in Baghdad will lead to the marginalization of a very large and politically active force, namely the protestors on the streets, that can contribute to solving the problems in the country. Therefore, the new government under Muhammad Tawfiq Allawi will in all likelihood fail.

On the other hand, if US forces withdraw from Iraq, tensions would rapidly escalate between the two countries, resulting in enormously grave consequences for Iraq: economically, militarily and politically.