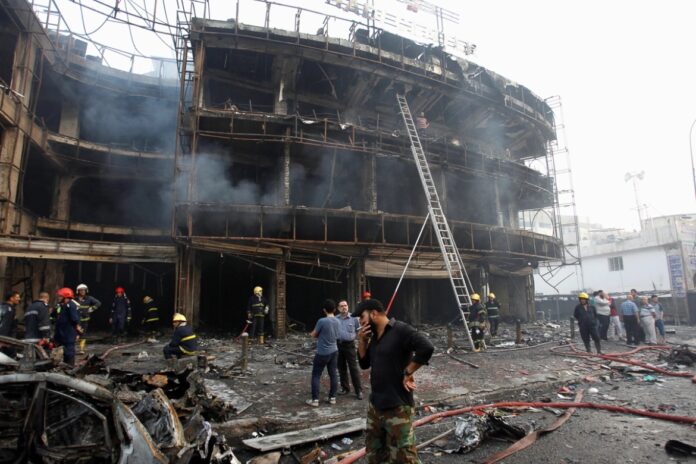 Iraq – just like the rest of the world – has suffered from extremism, and perhaps the bitter Iraqi experience with extremism leading to violence has exceeded what other countries experienced. This became clear, especially after the US occupation of Iraq in 2003.

In any case, we are not here to discuss Iraq’s experience in the war of al-Qaeda or ISIS, but the paper is based on briefly classifying the extremism that leads to violence in Iraq, and we can limit it to two levels. We will briefly address them.

First: Levels of Extremism Leading to Violence in Iraq:

Extremism against the state.

This classification includes most of the Islamic groups that were associated in one way or another with the Salafi-jihadi ideology – al-Qaeda and ISIS in the foreground. These terrorist organizations adopt a central creed based on rejecting the present states and accusing those who run them of infidelity, even if they are from the same sect that these organizations claim to align under.

These terrorist organizations also accuse others who disagree with them of infidelity, and cast into doubt all those who agree with the state or cooperate with it, even if they belong to the same sect of these groups. The provinces inhabited by the majority of Sunnis in Iraq have been subjected to major assassination campaigns, targeting officers and employees of the security services, as well as clerics who refused to cooperate with extremist organizations, and innocent citizens who refused to pledge allegiance.

Although these groups agree on the ignorance of Islamic societies, accusing the states of infidelity and fighting them according to the method of Abu al-Ala al-Mawdudi and Sayyid Qutb, and the agreement of most of their positions regarding the Shiites. However, the applications of their work differed in Iraq from one organization to another.

Al-Qaeda fought both US forces and the Iraqi government, in the course of fighting the enemy near and far. Contrary to the central idea in the organization, which revolves around striking Western interests in general and the United States in particular, which leads to the withdrawal of US support for the Arab and Islamic regimes that revolve in its orbit, and as a result these regimes will collapse, to be replaced by Al-Qaeda through the local groups under its banner. Al-Qaeda in Iraq also opened another front to kill Shiite civilians in successive bombings in Iraq throughout its years of operation under the leadership of Abu Musab al-Zarqawi.

As for ISIS, it focused on the local front and on the near enemy. And ISIS worked to fight what it described as “infidel regimes” wherever they existed in Islamic societies, and to purify these societies of everyone who disagreed with the organization on sectarian, intellectual and religious grounds, in the most violent way possible, according to what Abu Bakr Naji looked at in his book “Management of Savagery”. ISIS did not record a specific targeting of the United States and its allies in Iraq.

We will notice that al-Qaeda – here – left the local organizations to run the affairs of their Islamic countries in their local communities, did not call for an Islamic caliphate, and did not aim to actually abolish the borders, although the solidarity between these movements and their one reference will lead to the practical abolition of the borders. Unlike ISIS, which aimed to abolish borders and establish an Islamic caliphate according to its international standards, rejecting the divisions established by the “Western colonialism” of the region.

On the practical side, ISIS has surpassed the terrorist organizations that preceded it in Iraq in targeting violators of all their affiliations, and has been extravagant in killing disobedient Sunnis, and in displacing and killing religious minorities. During the years of fighting al-Qaeda in Iraq, no cases of rape or captivity of women were recorded, unlike what happened with ISIS, which deliberately raped and enslaved women, including Shiite Muslim women.

It can be said that the majority members of Al-Qaeda in Iraq were Iraqis, it is true that they did not carry out suicide operations, but most of the fighters and leaders were Iraqis, and their affiliation with Al-Qaeda was more political than ideological. They were subject to a tribal system in which Iraqi clans overlap in sects, so no cases of rape were recorded at the height of the years of sectarian killing in Iraq in mixed areas such as Diyala Governorate. Because the leaders in al-Qaeda were from the region, they could justify the tribal killing, but there is no justification for raping women, which would be an unforgivable tribal disgrace, and it applies to killing women as well.

As for ISIS, the majority of its leaders were foreign extremists in the interpretation and implementation of Sharia, which made the organization not stop at the shedding of Muslim blood, but rather went beyond it to enslave women, raping and killing them alike with men, in a behavior that reached the peak of brutality.