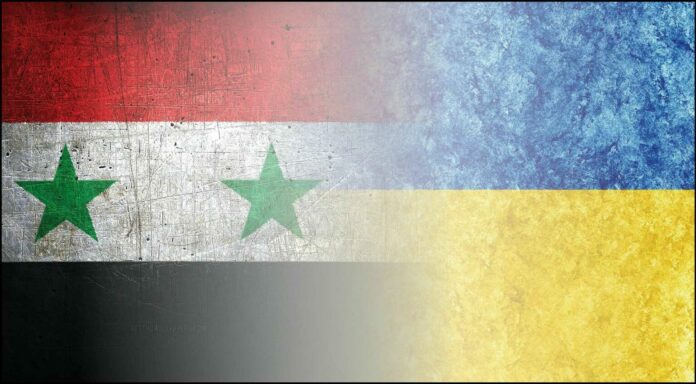 Syria was almost the only country that declared its support for the Russian “military operation” in Ukraine, since its first day, while the Syrian opposition called on the West to respond to Russia in Syria, and asked it for support with money and weapons against Damascus. A relatively sharp polarization emerged among the Syrians regarding the crisis, between those who viewed it as an opportunity that must be seized, and those who viewed it as a threat that must be contained. Even if the in-depth reading shows that they considered it an “opportunity and a threat” at the same time!

The analysis stems from the existence of “objective interdependence” and “mutual influence” between the Ukrainian and Syrian crises, as they are two arenas for competition and conflict between Russia and the West, perhaps more than two local or internal crises! And that war is not a normal option between Russia and the U.S… The Syrian experience, since the 2011 event and the war that followed it, has shown that the contradictions between them can proceed with a degree of restraint, discipline, and a desire for understanding. And both of them achieved significant gains in it.

The Syrian experience could have represented a “framework” or “modal” for the interaction between them in Ukraine. But this has not happened so far, although it is likely that they will return to it, in Ukraine, and not leave it in Syria, assuming a rational reading of the situation by policy and decision-making actors in Moscow and Washington.

As there have been indications of applying the experience and lessons of the Syrian war to the Ukrainian war, in terms of media and propaganda tactics, communication and social media, military operations, displacement and asylum policies, siege and sanctions, the role of international networks, foreign fighters, and everything known as “hybrid war” tactics and its tools; On the other hand, questions and assessments arose about the possible or potential repercussions or effects of the Ukrainian crisis on Syria, in terms of considering it an arena of “parallel confrontation.” Retraction of the “framework understandings” between Russia and the U.S. about it, “Reproduce” the war in it, price-tagging it, each side proceeded to its maximum bets against it; Or an arena for a “trade-off” between it and Ukraine, or a possible “bargaining chip” in any process of solution or settlement between Russia and the U.S.

Like any reading or analysis, this text focuses on points more than others: Russia and the U.S. as major actors in the Ukrainian and Syrian events or crises; And the effects of the crisis in Ukraine on the Syrian crisis in the political and strategic aspects, more than the economic aspects, on the importance of the latter; And the complex approach from the perspective of the threat – the opportunity for the political system and the state in Syria, and the signals and warnings about the possible responses by Syria and a number of countries in the region – especially Iraq and Iran – to the crisis.

First – between confrontation and trade-offs

Russia and the U.S. do not prefer to enter into a direct confrontation between them in Ukraine or elsewhere. Because there are many constraints, including the dangers of slipping into a major war, the outcome of which is difficult to predict. Therefore, the two sides are forced to follow complex, but indirect, confrontational policies:

Russia, to proceed with the military operation until several goals are achieved, which focus on Ukraine’s neutrality, its disarmament, and the guarantee of Russia’s interests in it.

And the U.S., by continuing to support Ukraine. turning the Russian military intervention in it into a “war of attrition,” strengthening the blockade and economic strangulation, security and military stress, political isolation…etc.

As for the possible repercussions of the crisis between Russia and THE U.S. in Ukraine on the Syrian crisis; We can refer to two main potential levels or patterns for this. The first is that Syria is considered an arena of confrontation and implication, or a quagmire in which each party is trying to drown the other. The second is that it is considered a card, an arena for bargaining, or a trade-off.

For Syria to be a side or parallel arena of confrontation. but it is indirect, and each party can claim its ability to turn it into “another Afghanistan” for the other party, as the “Afghan lesson” is the same for both of them, even if they are not the same. Thus, the estimates that focus on the ability of the U.S. and its allies to make Syria “another Afghanistan” for Russia, and excluding the U.S. from that, i.e., excluding Russia’s ability to make it so for the U.S., are inaccurate.