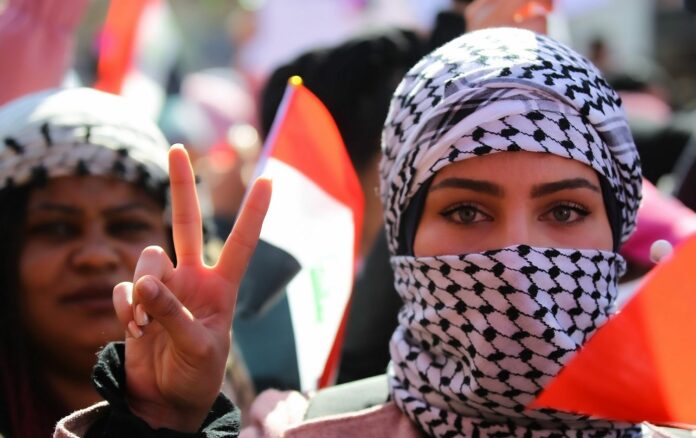 In March, the international community celebrates women, tracking their most important gains in the political and social context. Women represent 49% of the population of Iraq, where the change of government in 2003 and the ensuing violence increased the vulnerabilities faced by Iraqi women and girls during the conflict and its aftermath. The insecurity of women in Iraq is one of the main factors that stand in the way of achieving gender equality and reinforcing the status quo, hampering the societal peace process. Approximately 15,000 women were subjected to domestic violence by their parents, husbands, offspring, and relatives in the first half of 2021 only. We are only discussing cases that called for a security intervention because many cases are unreported and kept secret.Violence against women does not stop at the borders of domestic violence only. Women’s groups and civil society activists who emerged as leaders after 2003 were constantly threatened – if not killed in broad daylight – to shun their voices, eschew their efforts towards peaceful activism, or towards demanding rights.

Since the regime changed, Iraqi women have led changes at the local and national levels. Women lead a significant proportion of civil society organizations in Iraq (Baghdad, Kurdistan Region, Basra, Najaf, and Nasiriyah). To this day, they play an important role in maintaining social cohesion in a society that suffers from major problems. Iraq’s lack of functional institutions meant that civil society organizations were essential to maintaining a common ground during the turmoil that followed the fall of Saddam Hussein’s regime. However, these women-led efforts were not reflected in any semblance of their explicit participation in national reconciliation or political participation without constant dictates or threats. Women in Iraq have faced systematic violence from government agencies, clans, and armed groups, and as a result, they continue to find themselves as second-class citizens. As well as the impact of persistent bad economic conditions on pre-existing gender inequality.The most important obstacles that limit the role of Iraqi women can be traced (from two axes): The first is the legal obstacles that treat women as inferior to men and are directly related to increased violence or endangering women’s lives. The other is related to the social environment and the general cultural context that reinforces the stifling of women, and at other times encourages their abuse.

Among the main laws that discriminate against women and girls in Iraq is Article (41) of the Iraqi Penal Code No. 1, which stipulates “there is no crime in exercising the husband’s legitimate right with his wife,” including “disciplining the wife by her husband.” Article 128, clarifies a number of reasons that lead to either the mitigation of the penalty or its abolition. Article 398 of the Penal Code exempts an offender who has committed a crime out of “honour” from punishment under the so-called “Honor killing” in local communities. The law also grants freedom to anyone who rapes his victim and then marries her, and in this case, the offender is exempted from prosecution. This indicates the complicity of the Iraqi Penal Code – legislated in 1969 and which remained unchanged even with the change of the political system in 2003 – violence against women and girls. It incentivizes perpetrators to commit their crimes with continued impunity and leaves women and girls who are survivors of gender-based violence without any legal protection.

The aforementioned provisions of the Penal Code are based on the assumption that men have the right to discipline women, girls, and children. These legal standards place women and children under certain behavior, and if they violate, they will receive severe penalties. The Iraqi Penal Code, with its positivity in other articles, grants males full authority to “enforce the law” inside their homes, and the increasing crimes against women and children are justified by the deteriorating political and economic conditions. Although the situation in Iraq today, compared to years of long wars and an economic and food blockade, maybe the best.