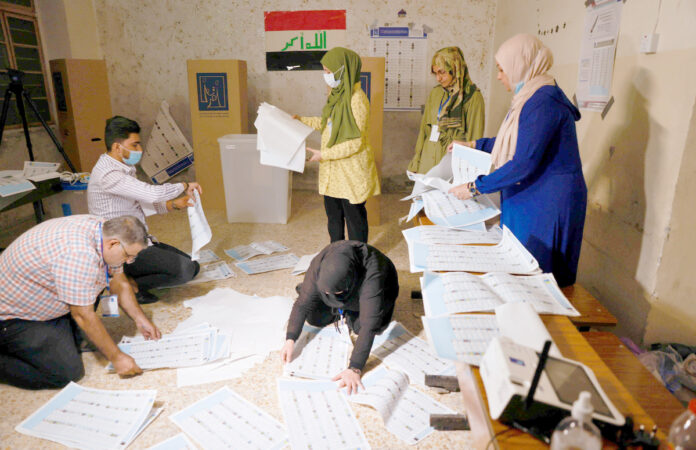 Legislative elections were held in Iraq on their scheduled date on 10/10/2021, the fifth legislative elections after 2005, and the first early parliamentary elections; As a result of the popular movement that took place in late 2019; Because of the rampant corruption in all state departments, the deterioration of services, as well as the high rate of poverty and unemployment, and one of the results of the movement is the change of Election Law No. 9 of 2020, which depends on the intermediate districts, meaning that the governorate consists of two districts or more, and the winner in the electoral district is the one who gets the highest votes, and then the second winner immediately follows, and so on, according to the seats specified in each electoral district. The law relied on individual candidacy within the electoral district. The law divided Iraq into (83) electoral districts based on the number of Quota seats for women, and the law prohibited movement Among the political blocs of the winning deputy except after the formation of the government, and what distinguishes those elections is the presence of independents who are not affiliated with any party, as well as the October’s demonstrations parties that emerged from the popular movement, as well as the traditional parties of various names. Those elections were administratively characterized by an acceptable level unlike previous cycles, the results of the elections were tampered with according to the parties’ share. However, in terms of voter participation in those elections, it was the lowest in all previous sessions after 2005. Participation (41%), i.e. with an abstention rate of (59%), in contrast to the previous cycle, which had an abstention rate of (55.48%); This is due to a feeling of alienation among most citizens, especially young people, with their inability to effect change, or their inability to influence government decisions, the lack of services, the spread of political corruption, poverty and high unemployment rates, all of which lead to electoral reluctance, in addition to the partisan Quotas that made elections that were devalued to most segments of society. The outcome of the elections was a shock to some segments of society and political parties, as the Sadrist bloc won (73) seats, and the elections witnessed the rise of independents and October’s demonstrations parties, and the decline of political blocs that have a big influence in the political process, and Iraqi women exceeded the women’s Quota And this is due to the political awareness of the society about the importance of women and their role at the political, social and economic levels. These elections highlighted the rise of youth under the age of 30, and this did not happen in the previous parliamentary election cycles.