The killing of the commander of the Quds Force of the Iranian Revolutionary Guard, Major General Qassim Soleimani, on Iraqi soil by American forces caused widespread anger inside Iraq, which was exacerbated after Iran responded by launching ballistic missiles at two military bases hosting American soldiers in Erbil and Anbar, in northern and western Iraq. The military confrontation between the United States and Iran has led many to fear that Iraq will turn into an open arena for settling scores between the two countries.

The Iraqi parliament voted on January 5, 2020, on a decision consisting of five paragraphs prepared by the political blocs and the specialized committees to end the foreign military presence in the country. The decision included:

With the Iraqi parliament voting on the resolution, thousands of supporters of Iraqi Shiite leader Muqtada Al-Sadr participated in massive demonstrations calling for the removal of American forces from Iraq. Al-Sadr considered the points raised by Parliament to vote on the American presence as a “meager response” that is not commensurate with the American violations. He called for the formation of what he named “the regiments of the international resistance” in response to the US violation of Iraqi sovereignty. Al-Sadr called on Parliament to cancel the security agreement with the United States and not to adhere to its terms. Also, he demanded the closure of the American embassy in Iraq, the criminalization of communication with the American government, and the closure of US military bases in the country[2].

The Iraqi President Barham Saleh, in a speech during Davos Economic Forum on December 22, 2020, explained that “the regional conflict threatens our sovereignty while we are in the eye of the storm”, stressing that Iraq is seeking to have good relations with everyone, noting that “the Parliament’s call to withdraw US forces from the country is not a sign of ingratitude or hostility, but rather a reaction to what many Iraqis see as violations of the sovereignty of their country.[3]”

Likewise, the former PM Adel Abdul Mahdi asked the US to develop a plan to withdraw its remaining forces, indicating that it has become difficult for Baghdad to protect these forces. In a speech in the House of Representatives, he said: The conditions for the presence of foreign forces are limited to training the Iraqi forces, and that there are consequences to the conflict between the US and Iran in Iraq[4]. The US Secretary of State Mike Pompeo called for sending a delegation to discuss the mechanism of the withdrawal of American forces from Iraq[5].

Despite the demands, it was noticeable that the Iraqi President Barham Salih and his American counterpart Donald Trump agreed during their meeting on the sidelines of the Davos Economic Forum on the need to preserve the US military role in Iraq. They agreed on “the importance of continuing the economic and security partnership between the US and Iraq, including the fight against ISIS.” According to a statement of the White House, there was no mention from the US administration to a request made by Barham Saleh to Donald Trump to “reduce the presence of foreign forces in the country.[6]”

In conjunction with these events, the New York Times reported that the US resumed its joint military operations with the Iraqi forces after it stopped at the initiative of Washington after the killing of Soleimani. This indicates that the US Department of Defense wants to resume its cooperation with the Iraqi army in the field of combating ISIS as soon as possible[7].

Reasons behind the Iraqi hesitation regarding the demand for ending the presence of US forces in the country are:

Fearing the return of ISIS: There is intelligence that thousands of ISIS fighters in sleeper cells await for an appropriate opportunity to restore their activity again, and the remnants of ISIS may take advantage of the political turmoil and the general situation to carry out tactical attacks to achieve their goals, especially if the role of the coalition is reduced. It is not necessarily that ISIS itself will restore its activity. Any terrorist group can take a role in a weak and volatile region, especially since the Iraqi security forces’ capabilities may not be up to the bar without the air cover and international intelligence[8].

Fearing Iran will achieve its goals: Some believe that the complete withdrawal of the US forces will achieve one of Iran’s main goals in the region. Iran launched a ballistic missile attack on two airbases in which US forces are present in Iraq as a response to the assassination of Qassim Soleimani. The Iranian Supreme Leader Ali Khamenei considered the attack as a “slap in the face” of the United States and called for the end of the US presence in the Middle East. Iranian President Hassan Rouhani echoed Khamenei’s words by saying that the “final response” to Soleimani’s assassination is to “expel all US forces from the region.[9]”

Influencing the balance in Iraq: There are fears among some Iraqi, especially the Sunnis and the Kurds, that the end of the US-led coalition in Iraq could cause a rebellion, undermine security, and increase the influence of Shiite armed groups, even with what is going on in southern Iraq. Some see that the Sunnis, Kurds, and minorities regard the US as a balance-control officer against the Shiite political parties who control the Parliament and the government. Analysts say that if the Iraqi government decides to proceed with the decision to end the presence of foreign forces, the Sunnis may seek an autonomous region, like the Kurdistan region in northern Iraq[10].

US’s sanctions threat: One of the factors that have a significant impact on the Iraqi government’s reluctance to answer the demands to remove foreign forces from the country is the threat of US President Donald Trump to impose sanctions on Baghdad in response to the Iraqi parliament’s call to remove the US forces. Trump said that the sanctions against Iran would be a small thing next to what he is going to impose on Iraq, stressing that his country would not leave Iraq unless it pays the price of an airbase build in the country. This was while the US State Department expressed what it called the feeling of disappointment at the Iraqi parliament’s call to obligate foreign forces to withdraw from the country. It added in a statement that Washington strongly urges Iraqi leaders to take into consideration the importance of the economic and security relationship with the US[11].

The Wall Street Journal stated that the US may suspend the Central Bank of Iraq account in the Federal Reserve (the American Central Bank) in New York, in a move that negatively affects the capabilities of the Iraqi economy, as the country keep its revenues from oil sales there. These revenues are used to pay government salaries and contracts. WSJ pointed out that the Federal Reserve held about 3 billion dollars in deposits at the end of 2018, according to the latest financial statement from the Central Bank of Iraq[12].

The US aid plays an important role in supporting the financial system in Iraq, by contributing to stimulating the World Bank, the International Monetary Fund and allied countries to participate in reconstruction and stability programs, as well as urging large companies to invest inside Iraq. Cutting the US aid to Iraq will affect this negatively[13].

Influencing the training of Iraqi forces: If the demands to remove foreign forces from the country are fulfilled, this means the reduction of military assistance to Iraq, especially in the field of arming and training security personnel. The US is the main supplier of weapons to the Iraqi army, Counter-terrorism forces, and federal police. It also provides Iraq with surveillance and espionage techniques for intelligence and national security services. If Trump implements his decision to cut US military aid to Iraq, this will have repercussions on the structure of the military system, and adversely affect the completion of this structure and its rehabilitation after the war against ISIS[14].

Like the American, the British, French, Australian, Dutch, and Italian provide consulting and training to the Iraqi forces. Therefore, the withdrawal of the US forces means the withdrawal of these forces too. Then Iraq will be unable to train its forces because it relied heavily on the international coalition. The withdrawal will also affect the air force, which depends a lot on the capabilities of the coalition, because Iraq does not have sufficient flights, especially on the borders, whether between Iraq and Syria or Iraq and Turkey[15]. 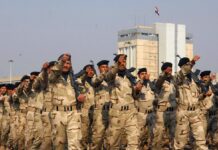 Conscription into Iraq… Problem or solution?