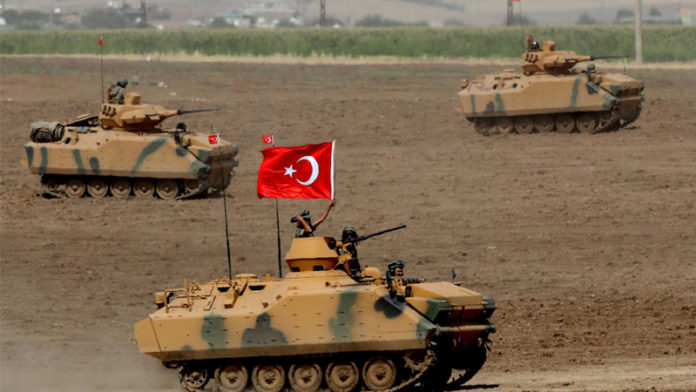 During the past few days, Turkish forces have penetrated deep into Syrian territory, east of the Euphrates River, attacking Kurdish fighters, despite the US presence there. There is no miscalculation on the part of Turkey, since it is has become clear that the Americans will be leaving sooner or later, as part of the total withdrawal of US forces which commenced a few days earlier.[1]

The issue that should not be overlooked is Iran’s antagonism towards the Kurds, especially the Kurds in Syria. In this regard, the Kurdish issue has always posed a challenge to Tehran on different levels. For this reason, Iran has always maintained a policy of restraint towards the issue, except that is when the Kurdish issue with its current exigencies and developments impact directly on Iran’s national security.

From Tehran’s perspective, the Kurds in the Kurdistan region of Iraq intended to threaten Iran’s national security, whether directly or indirectly, by holding a referendum in the Kurdistan region in September 2017.[2]In a case such as this, Tehran would in all likelihood only abandon some of its political and diplomatic considerations, but were events to reach boiling point, Tehran would undoubtedly throw caution to the wind and be forced into direct confrontation. However, and more usually, whether it concerns Turkish Kurdistan or Syrian Kurdistan, Iran has always tried to keep its distance from this issue in order to remain secure from any collateral damage or any unintended consequences. Successive governments based in Ankara have over the past few years considered Iran to be a supporter of the PKK[3], with such accusations having also been made by Turkey against the United States.[4]

Consequently, and under the current circumstances and in light of recent developments in the Middle East, with an eye on the escalation of the conflict between Iran and Saudi Arabia, which came close to a climax following the attack on the Saudi Aramco oil facilities, there is no doubt that Tehran needs a regional ally. What better ally than Turkey, a country that is undoubtedly one of the biggest powers in West Asia. Therefore, if Tehran can convince Ankara to go along with its line of thinking or to tow the line regarding the current developments in the region from Israel to Yemen, Lebanon, Palestine and especially Syria, this will cause a serious rift in Turkish-Saudi relations, whilst Iran’s political and diplomatic fortunes in the Middle East will see a marked increase.

Therefore, whether it concerns the issue of the Kurds of Turkey (PKK) or the issue of the Kurds of Syria and during more than 7 years of civil war in the country, Iran has steadfastly refrained from intervening as deeply as it has intervened in other parts of Syria, especially in the central and southern regions of the country, so as not to cross Ankara’s red lines with regard to the Kurds of Turkey and Syria[5]. Otherwise, it could impact negatively on the very important strategic relations between Iran and Turkey, especially during this sensitive period.

In this regard, even if Iran were to maintain its robust conservative approach towards Turkey regarding the most recent developments in Syria, whose scope has in fact exceeded that of the Syrian Kurds, and as witnessed in recent months, Iran has been silent against its will on the issue of Idlib and Ankara’s support for Jabhat al-Nusra, regarding which we do not see any practical response for an end to the Idlib issue, so that the issue of Idlib, which is part of Turkey’s red lines, will not again dominate relations between Ankara and Tehran.

But this is not the end of the story. In addition to Ankara’s sensitivity towards the Kurds of Syria and Turkey, Iran also has to face the sensitivities of its own Kurdish minority. This sensitivity becomes even more critical for Iran when part of Kurdistan is located on Iranian soil. Thus, even minimal support by Iran for Turkey in its attack and assault on the Syrian Kurds will produce a strong Kurdish response from Syria to Turkey and Iraq, especially from Iran’s Kurdish nationalists. Therefore, in order to avoid this sensitivity among its own Kurds, Iran is trying, as far as possible, not to become embroiled in the Kurdish issue, so as not to face problems either with the Turkish government or with the Kurdish community in Iran.

Iran’s response to recent developments, following the withdrawal of US troops from northeast Syria and the military offensive by Turkey against the Kurds in Syria, first crystallized in the October 7, State Department statement opposing the Turkish incursion into Syria[6]and any attacks being launched against the Kurds. The second response came in President Hassan Rouhani’s speech urging Turkey to avoid military action in Syria.[7]

These positions have always been part of Iran’s principled and strategic philosophy, which includes a diplomatic rationale based on non-invasion, attack and intervention by foreign actors in the affairs of other states such as Syria, and the resolution of differences through Syrian-Syrian dialogue. The same principles hold true for Yemen, Afghanistan, Palestine and other conflicts.

Following on from these points, Iran, not unlike like the United States, has not yet made a final choice between the Kurds and the Turkish government, and does not appear to be willing to do so. After all, it has become clear that given the stability of Iran in the Middle East, and given the geopolitical and geo-strategic implications of the Kurds in Iran, Turkey, Syria and Iraq on the one hand, and Tehran’s pressing need for an alliance with the Ankara government on the other hand, it cannot be as easily chosen as Trump did when he sided with Erdogan. Choosing either side will mean sacrificing part of Iran’s interests in the region. Iran will therefore continue to court the government of Ankara and the Kurds of Syria and Turkey, in order to maximise its interests and profits from this game.

[4]How Kurds Could Be Affected by Trump’s Syria Shift. https://www.nytimes.com/2019/10/07/world/middleeast/turkey-syria.html

[6]What is Iran’s reaction to the East Euphrates operation? https://www.alalamtv.net/news/4480351/