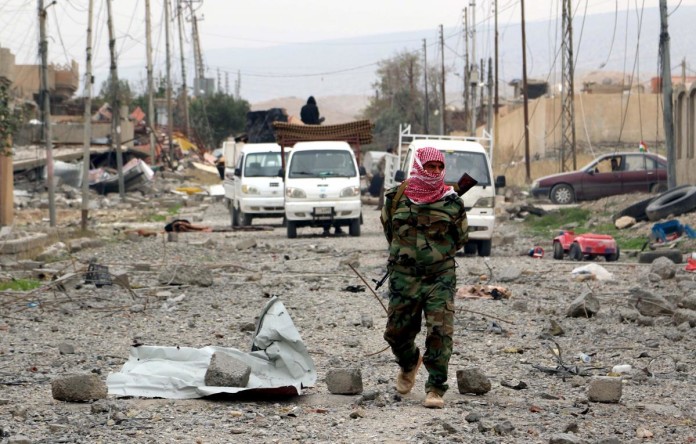 Understanding thenature of recent terrorist threats that rose in some of the northern and eastern parts of the countryis very important for the fight against Daesh, as they have the potential to threatthe security gains achieved bythe military victory over Daesh.

Based onthe strategic principle that security threats and itspaths relyon the premise that “a terrorist phenomenon cannot continue in its present form; it must either evolve or dissipate and eventually disappear,” this paper seeks ways to strengthen counter terrorism efforts. However, the real problem liesin adoptingeffective approaches and tools to combat terrorism in Iraq, bearing in mind that the current security situationis quite different from previousera,particularlyinthe nature of terrorist threatsand necessarymeasuresforeradicatingthem.

Ultimately, the security imperative necessitates the formulation of a new and comprehensive strategic vision for dealing with and responding to these threatsbased onpre-emptive measures that target imminent security threats.Therefore,itisimportant for Iraqsecurity apparatus to adoptseveraltools to counterthethreat of remainingterrorist cells that are scattered in some of Iraq’s strategic areas, these tools are listed below:

This tool is based on the idea that the current counter terrorism apparatus is structured to conclude their war on terrorism by imposing military control overthe entire Iraqi territories.[1]This tool achieves a national counter-terrorismpriorityby preventing Daesh from controlling any swathes of territories. Also, it facilitatesastrategic military doctrine that providesmomentumto military efforts during direct clashes with Daesh.

This tool presentsadeterrent to pre-empt any terrorist operation by mobilizingintelligence tactics intoa strategy based on information gatheringin order to achieve a number of objectives[2], which arepenetratingterrorist groups byprofessional espionage networks to monitor these terrorist groups and observe their activities at all times and in all places.

Media is the primary buffer against intellectual vandalism in the process of confronting terrorism in Iraq. The currentnational security environment in Iraq raises a number of peculiar issues, such as the need to respond quickly to the challenges and consequences of terrorism. This tool gives strategic momentumto counter terrorism through a combination of tactics and the media,[4]given the fact thatDaeshdependsheavily on propaganda,aiming at manipulating  and influencing thenational security environment,especially prior to 2014. As a matter of fact, media was instrumental in stimulating and galvanizing the security apparatus to address challenges posed by terrorism. Thus, in order to curb reminingterrorist cells, it is necessary to adopt counter propagandastrategy that addresses terrorists’propaganda attacks.

There is nodoubt that cyber terrorist threats represent one of the biggest challenges facing Iraq’s national security. Daesh relies on digital technology to communicate with the outside world and promote its ideas and activities to the outside worldthrough the usage of digital advertising.[5]Therefore,security agencies must take measures and employ tools to curb Daesh’s digital capabilities by buildingthe cyber capabilities of the security agencies and by coordinating with the global intelligence agencies in order toexchange information and expertise.[6]

This tool represents a major gateway for curbing the phenomenon of terrorism through preventive intellectual methods that subdue ​​extremist ideasamongst the youth. It also promotes the idea of the acceptance of others through a strategy of intellectual contradictions (perceptionmanagement), which is based on universal inclusivity in a single social and intellectual melting-pot. It goes without saying that all this will require an enormous governmental effort, with intellectual and religious dimensions, to banish and abolish any form of ​​ideological and religious extremism amongst Iraqis.[7]

Materialneedsarean important motivation for anyindividual,who aspires for enjoying a decent life,topursueillegal means forachieving his/herambitions. Many experts in the fields of political violence arguethat the origin of the conflict is based on material needs. Hence, raisingincome of individuals and satisfying theirbasic needsis necessaryto ensurethat the majority of people are not drawn to the path of terrorism and religious extremism – as often happens in times of economic depression[8]. This might be evident in the alienation of individuals from civilised life and their movetowards radical ideas that promote violence and terrorism.

Byimproving economic conditions through the revitalisation of the domestic and government-directed economy,  the material needs of those reside in affected areas will be addressed, and eventually the security environment will see positive outcomes, such as limiting the ideological attractiveness of terrorism and its recruitmentefforts.

The premise underpinning this tool is the idea that promoting nationalidentityisvery effective to counter the threat of terrorism and extremism. Having a national identity that surpass sub-identities will limit the relevance of sub-identities, which their politicization often consideredroot cause of terrorism and extremism. Therefore,the Iraqi government should exercise their functions in a way that spur nationalism,which will undoubtedly provide a strong driving force for inclusivecitizenship that could contain all social interactions within society[9]. This will eventually lead to the rise of national identity at the expenseof religious and class affiliations, and represents a serious blow to terrorism.

It is reasonable to deduce that Daesh is trying to adapt gang style tactics and strategies in its efforts to damagenationalsecurity,especiallyin certain open and geographically complex areas. Therefore, addressing these terrorist threats will require a large degree of harmonisation and co-operation between the traditional military and intelligence efforts and non-traditional ones such as media and cyber security, alongside other tools; to support the security effortsto combatremainingterrorist cells.

Also, it is important to adopt a comprehensive strategic vision to deter and contain potential threats to Iraq’s national security apparatus, especially after the battle between Iraqand Daesh has evolved from direct military confrontation into the indirect tactical confrontation. This method will require the melding of different tools and tactics thatare quite different from previous ones, in order to preserve the security gains and to sustain security and stability.

[1]Hassan Saad Abdul Hamid, The role of Iraq’s security services in the fight against terrorism after 2003: Iraq’s Ministry of Defence- a case study; Ighterab Journal, Biladi Centre for Strategic Research and Studies, Baghdad, No. 1, 2016, p. 84.

[2]Bashir al Wundi, The Absence of Security, “The Role of Intelligence and Development in the Restoration of Security”, 1stedition, Dar Al-Safah for Printing and Publishing, Beirut, 2013, p. 61.

[8]Naji Hussain Ali, The Iraqi Economy Between the Risks of Collapse and Sustainable Development, Iraqi Ministry of Planning, Department of Economic and Financial Policies, Baghdad, 2016, p. 22