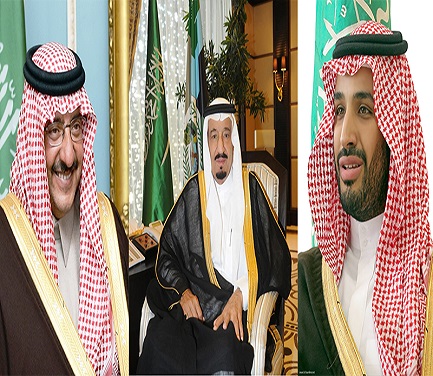 The Saudi monarch, King Salman bin Abdul-Aziz, in a sudden step decided to conduct fundamental changes affected his government. Where, according to Saudi Press Agency, has issued Royal orders that bear radical changes at the level of governance in Saudi Arabia.

King Salman’s Royal orders included the removal of his half-brother, Prince Sultan bin Abdul-Aziz of the mandate of the Covenant. The Prince Muqrin of Saudi Arabia was seen as a strong man in the ruling family.

Prince Saud al-Faisal was excluded; the veteran diplomat who coined for a long time the Saudi foreign policy, from his job as the Foreign Minister.

Prince Mohammed bin Nayef as Crown Prince, instead of Prince Sultan bin Abdul-Aziz, the Minister of Interior and Deputy Prime Minister and Chairman of the Political and Security Affairs.

The Prince Mohammed bin Salman, the Defense Minister, and the man who is seen as a rising star in the Saudi Royal family, has been included in the sequence of changes. He has been appointed as Deputy Crown Prince,and retained in his post as Defense Minister, in addition to his appointment as Second Deputy Prime Council of Ministers and Chairman of the Board of Economic Affairs and Development.

Prince Mansour bin Muqrin has been included as a member into the Government Advisors to the King Salman; rank of Minister. These culminated in decisions regardless month’s salary to employees of the   Saudi armed forces of the military and civilians.

Changes reflect the balance of the ruling family in Saudi Arabia. It seems that the internal security file has been handed over officially to Prince Mohammed bin Nayef.

It seems that domestic considerations in the Royal Family, or the Saudi interior has trimmed Prince Mohammed bin Salman of opportunities to be the Crown to the reign of his father, so Prince Mohammed bin Nayef as Crown Prince may have to absorb any criticism faced to Saudi Arabia in that he began providing his son Mohammed Bin Salman greater powers  in the management of the affairs in the Kingdom.

But the armed forces remained as they were,  however, Prince Mohammed bin Salman holds the management of economic matters. But Prince Muqrin exempt from the mandate of the Covenant, raises questions about the significance of this change, despite what was stated officially and deliberately by the Royal Order; that the exemption came at the request of Prince Muqrin, but that does not diminish speculations for the followers of the Saudi affair.

Such speculations arise from a rift in the Saudi Royal Family policy which began recently and pursued by the Saudi monarch, in the great role of his son, Prince Salman and in the formulation and implementation of these policies; including direct military intervention in Yemen. Additionally, such speculations stem from the possibility that the disposal of Prince Muqrin was because of his Yemini mother and is one of the reasons that he did not receive articulated positions in the management of the country’s affairs.

Such a move has been interpreted as a blow to a personality that is one  of the most important figures close to the United States in the Saudi royal family.

Interestingly, regarding the exemption of Prince Bandar Mansbah, and the mandate of the Covenant on behalf of the Presidency of the Council of Ministers, he has not been appointed to an alternative position, and he was faced with an appeasement policy of Royal decisions, despite his long experience and extensive relations in the international sphere.

Reinforcing speculation is the existence of a dispute in the case of the Saudi Royal Family exempting Prince Saud al-Faisal, the Foreign Policy planner of Saudi Arabia since 1975.

Although appointment was honors, but the Royal Order also stated intentionally, that the exemption came at the request of Prince Saud’s   health reasons. He has put forward the appointment of the  Saudi Ambassador to Washington, Adel al-Jubeir, Foreign Minister of Saudi  Arabia, rather than Prince Saud al-Faisal, which raises questions about allocating the job to an individual from outside the Royal Family, and indicates to the speed in the decision-making, without the prior plans or due to the differences within the Royal Family over who occupies this position. It is expected that Jubeir will practice this position until an agreement is reached on the person who will manage the Saudi diplomatic relations.

To ensure the control of matters, and to ensure support for the Saudi Armed Forces of the changes, it has been decided upon the payput of monthly salaries to the staff of the Armed Forces. The move is strategic in ensuring the continued loyalty of the Armed Forces of the new decisions and appointments taking place. Such moves indicate the doubts of the Saudi Monarch and attempts to pocket the Saudi Armed Forces, who would usually reject the succession of the Royal Family from these new Royal exemption orders and new appointment positions, which can be possible and may weaken the influence of those decisions by the monarch.

Pending the outcome of these new changes in the Saudi Government, especially at the level of the Kingdom’s relations with regional and international surroundings; and the situation in Saudi Arabia’s interior, but observers doubt the Saudi Royal Family’s capacity in the effects of these new decisions due to these Royal radical changes in its policies, questioning the Royal positions in the Kingdom on commanding better and its ability to meet the challenges it may face on internal and external levels. The Saudi risk in Yemen may be one of their opportunities.