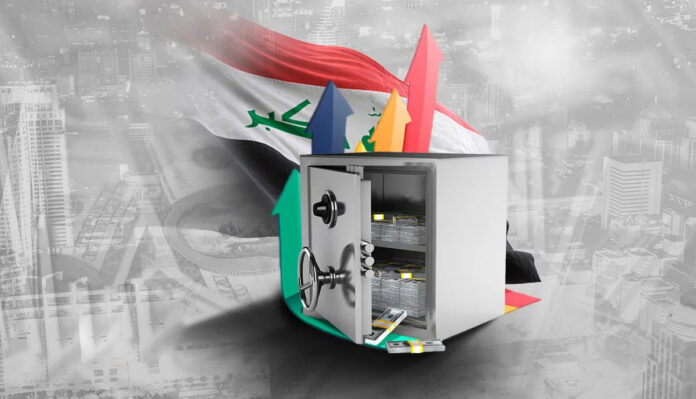 The real unplanned deficit in Iraq increased after the collapse of oil prices in 2015, which led to a rise in internal and external indebtedness.

Iraq should negotiate again to reschedule its foreign debts, especially the hateful debts, which were used for military and war purposes; Because Iraq was forced to borrow; To finance the war on ISIS, and that war represented a war on behalf of the world.

Following the policy of deficit, financing has distorted the state’s economic structure and an imbalance in the structure of public budgets in the Iraqi state.

The high rates of inflation, due to indebtedness, and the increase in the money supply with the inflexibility of the production system led to a decrease in the demand for the local currency, which leads to a reduction in subscription to domestic debt securities.

Diversification measures, building a debt guidance strategy, which works to revitalize the stock market, the stock market, control expenditures, establish the Sovereign Sinking Funds, bridge loans, and enhance confidence in deferred payment guarantees will contribute to reducing debt and enhancing confidence in the local economy and foreign investors instead of direct borrowing.

The Iraqi economy faces major challenges represented in the high volume of indebtedness resulting from decades of conflicts and economic fluctuations, including international economic sanctions imposed on it. In addition to the high volume of debts is the repayment of the dues of those debts and in some cases the high percentage of the deficit in repaying those debts, which reaches high numbers. Economists stress that the reason for the high debts and the inflated benefits are the result of financial and administrative corruption, poor wealth management, poor planning, and waste of these funds instead of achieving sustainable development. These debts are also affected by the deficit in the public budget due to the increase in public expenditures on the one hand, and the decrease in public revenues on the other. This deficit is covered by borrowing, whether it is internal or external debt, and on this basis, continuing to borrow leads to an increase in the size of the public debt to a level that exceeds the state’s ability to meet its financial obligations toward creditors.

An overview of the Iraqi debt

Indebtedness is when a country borrows from other countries or financial institutions, and debt is measured as a share of GDP. Economic crises lead to reluctance to repay debts, and it can be said that indebtedness is the state of the debtor country’s inability to pay its debts, which gives way to creditors, especially international financial institutions, to conduct rescheduling, and force the country to follow economic policies that help the payment process.

The history of Iraq’s debt in general and the external debt, in particular, is one of the sad facts in Iraq’s modern economic history. Government debt has remained far from the philosophy of borrowing to invest in development and achieve economic prosperity under forceful political circumstances and factors.

The conflict that has lasted in Iraq for more than 35 years has rendered the country unable to meet its enormous needs; For reconstruction through its current revenue from its resources generated from energy exports alone, has led to the demand for debt to increase the financing of reconstruction operations. Discussions within Iraq about the country’s debt were influenced by many factors, some of which were perceptions of debt; Because it is a weakness or a burden for the state, and some of it was related to feeling, and the struggle against foreign occupation, which sees indebtedness as a matter of holding the country hostage and paving the way for it to be re-colonized in the end. Iraq had not previously relied on the policy of credit payment, as the debt problem began in the 1980s since the Iran-Iraq war, and this war changed all this after Iraq incurred huge debts to finance a war that lasted 8 years. Later, the country incurred other debts in the form of compensation for the invasion of Kuwait. These huge debts were not known, but they became prominent in the first years after 2003.