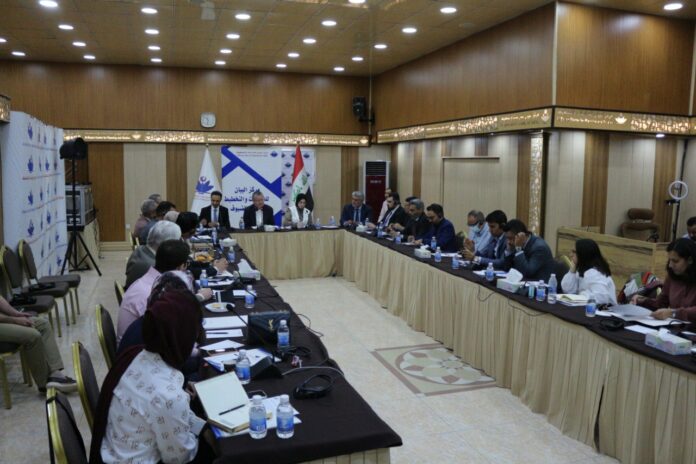 Al-Bayan Center for Planning and Studies held a discussion workshop entitled “The “Almuhasasa” System after Early Elections: Between the Status Quo, Reform and Change”, In cooperation with the Center for Middle Eastern Studies at the London School of Economics and Politics (LSE).

Professor Toby Dodge – from the London School of Politics and Economics – pointed out the importance of the ongoing political transformations in Iraq, and the need to understand the Iraqi context in addressing the concepts of “Almuhasasa”s, majority government, their requirements, and the challenges facing each of them from the Iraqi point of view.

In the first session, the spokeswoman for the Victory Alliance Ayat Mudhafar Noori referred to the vague interpretation of the concept of the major bloc by the Federal Court, and the issue of the quorum required to hold parliament sessions. She also touched on the most important challenges facing the current political blockage from the legal and political sides, especially the obstacles to forming a parliamentary majority.

The researcher and academic Professor Dia al-Asadi discussed – during the second session – the positions of the Sadrist movement towards previous governments and the current electoral system. Which resulted in greater political representation for the Iraqi voter, and the necessity of establishing majority rule in the country. Meanwhile, a member of the Sovereignty Alliance, Dr. Dhafer Al-ani, mentioned that there are quite a few citizens in the Sunni-majority governorates who doubt the majority government. He also pointed out the overlap of the concepts of consensus and balance and the difference between them. For his part, the researcher and academic Dr. Ihsan Al-Hadithi pointed to the political impasse in the country, which needs to develop radical solutions that address the concept of the majority, because the term “majority” in Iraq has had so many interpretations over the years.

In the third session, Mr. Manar Alobaidi, spokesman for Emtidad movement, addressed the importance of the opposition portrayed by Emtidad’s representatives in the Parliament, he pointed out the need to differentiate between the concepts of political opposition and political isolation, and the importance of having a political position unaffected by what he called “populists slogans” inside the Council of Representatives. While the Managing Director of Al-Bayan Center, Dr. Ali Taher Alhammood, indicated that the Tishreen demonstrations are the first of a kind. Because it was purely political, it also reinforced the need for a political organization characterized by the presence of effective leaders, and a realistic and practical political program, which was not in its full form by the Tishreen forces until now. The Secretary-General of the National House Party Mr. Hussain Alguorabi spoke about the specificity of the Iraqi situation and the difficulty of applying the experiences of other countries to it. Alluding to the efforts of the National House in seeking to renew the political discourse by focusing on the Iraqi nation, and what it requires to reconsider the mechanisms of the political process and its outputs, with the assistance of experts and specialists in this regard.

The three sessions included dialogues and interventions by experts, academics, activists, and those interested in “Almuhasasa”s issues in the Iraqi political system. 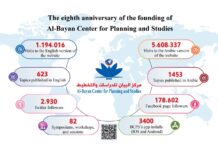 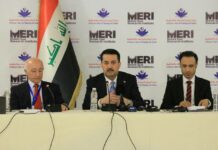