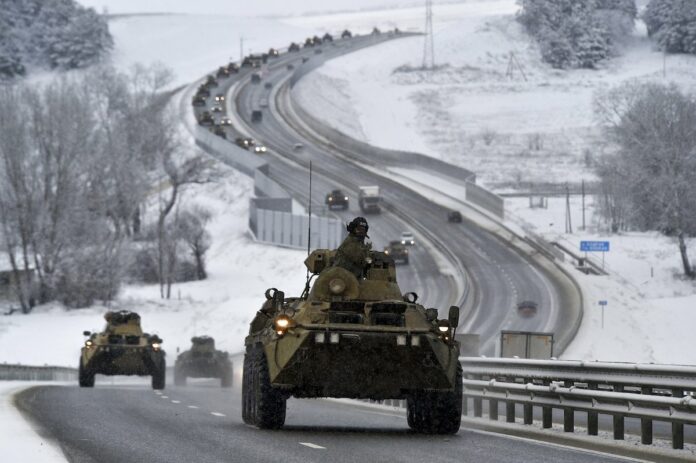 The Russian-Ukrainian conflict is no longer a product of the present, but rather has traces and historical imprints that date back to the era of European feudalism (the Middle Ages) before the building of nation-states.

Scenes of national conflict continued even under the Soviet confederation due to considerations of existence and ethnic affiliation. This politically affected the file of Russian-Ukrainian relations when they culminated in 2014 when Russia invaded and annexed the Crimea peninsula. The differences reached a climax after the right-wing party in favor of Ukraine’s accession to the eurozone came to power in Ukraine. This raised the fears of the Russian leaders of an attempt to bring NATO closer to its borders, expand widely towards the European East, and encircle the Balkans as an important and influential “energy” region in the global energy market.

The first axis: the causes and secrets of the Russian-Ukrainian conflict

There are many causes for the conflict between Russia and Ukraine, which is still the focus of a controversy that does not stop at the political elite. Rather, it goes beyond it to the sociological behavior of the societies of both countries, and before the building of nation-states in Europe, but it appeared strongly as motivating differences that pushed the conflict to its facets, as it centered on the image of factors centered according to the following:

First: the historical and cultural factors

Since Ukraine’s independence from the Soviet Union in 1991, it has been plagued by many historical factors, which carried with it divisions within Ukrainian society. And it led to the weakness of political structures and impeded the development of the Ukrainian national identity. Russification and Russian ethnic settlement, centuries ago, contributed to the priority of the Russian language as the main language, and the marginalization of other languages in the general community with the diversity of ethnic spectra such as Chechen, Lithuanian, Polish, Austrian, and the Tatar population who settled in the Crimea at that time. Ukraine’s independence was confirmed by a referendum held on December 1, 1991, in which 54% of Crimean voters supported independence from the Soviet Union. This was followed by a 1992 vote by the Crimean parliament to hold a referendum on independence from Ukraine, which led to a two-year crisis over the status of Crimea. At the same time, the Supreme Soviet of Russia voted to cancel the ceding of Crimea to Ukraine, and in return, in June of the same year, the Ukrainian government in Kyiv voted to grant Crimea as much autonomy as the Autonomous Republic of Crimea within Ukraine.

According to the 2001 Ukrainian census, 57.2% of Donbas residents are of Ukrainian origin, 38.5% are of Russian origin, and 4.3% belong to other ethnic groups, mostly Greeks who make up 1.1%, and Belarusians who make up 0.9%. Also, 72.8% of the population confirmed that their mother tongue is Russian, while 26.1% said that their mother tongue is Ukrainian. In addition to other languages spoken mainly by ethnic minorities, which constituted about 1.1% of the population.

According to the Ukrainian census of the same year, ethnic Ukrainians constituted 62.8% of the population of (Odessa Oblast), while ethnic Russians constituted 20.7%. Statistical estimates indicated that 46.3% of the population spoke Ukrainian as their mother tongue, while about 41.9% spoke Russian as a first language, and about 11.8% spoke other languages, specifically Bulgarian and Moldavian. Thus, Russia continued the strategy of demographic change according to the ethnic and cultural trends of the Ukrainian side.

In 1992, NATO allies began to think of increasing members from Central and Eastern Europe for the first time. Ukraine had a greater share after it had established official relations with NATO before the accession project, as it was interpreted by the visit of the Secretary-General of NATO to the capital Kyiv, which was matched by the visit of the Ukrainian President (Leonid Kravchuk) to NATO headquarters in Brussels.

From 1994 to 2004 and during 10 years as president, Leonid Kuchma helped transform Ukraine from a Soviet republic into a capitalist society by privatizing companies and working to improve international economic opportunities. However, in 2000 his presidency was shaken by the scandal of audio recordings that revealed that he had ordered the killing of an opposition journalist, after which he remained in power for another four years. In 2008, efforts (Yushchenko and Tymoshenko) continued to bring Ukraine into NATO, which led to the two formally requesting in January to grant Ukraine a “Membership Action Plan”, the first step in the process of joining the alliance, and this policy had repercussions on the energy economy.

As a result of international pressure to resolve the crisis, (Tymoshenko) negotiated a new deal with Putin, and gas flows resumed on January 20, as many countries of Europe are still dependent on Russian gas to this day.

In 2014, just days before he signed the NATO accession agreement, Yanukovych announced that he would refuse to sign an association agreement with the European Union to bring Ukraine into a free trade agreement. This trend came as a result of pressure from Russia to veto the decision, which sparked huge protests across Ukraine – the largest since the Orange Revolution – demanding the resignation of (Yanukovych).

The Minsk Group met again in Belarus in 2015 to find a more successful agreement to end the fighting. This led to the Second Minsk Agreement after it failed to end the violence from 2014 until today, in which more than 14,000 people were killed, tens of thousands were injured, and more than a million people were displaced.

Fighting continued in the Donbas, and Russia repeatedly attacked Ukraine in a series of cyberattacks, including the 2016 attack on the Kyiv power grid that caused major blackouts. In 2017, a large-scale attack affected key Ukrainian infrastructure, including the National Bank and the power grid. (Cyber-attacks from Russia have continued to the present; the last major attack targeted government websites in January 2022).