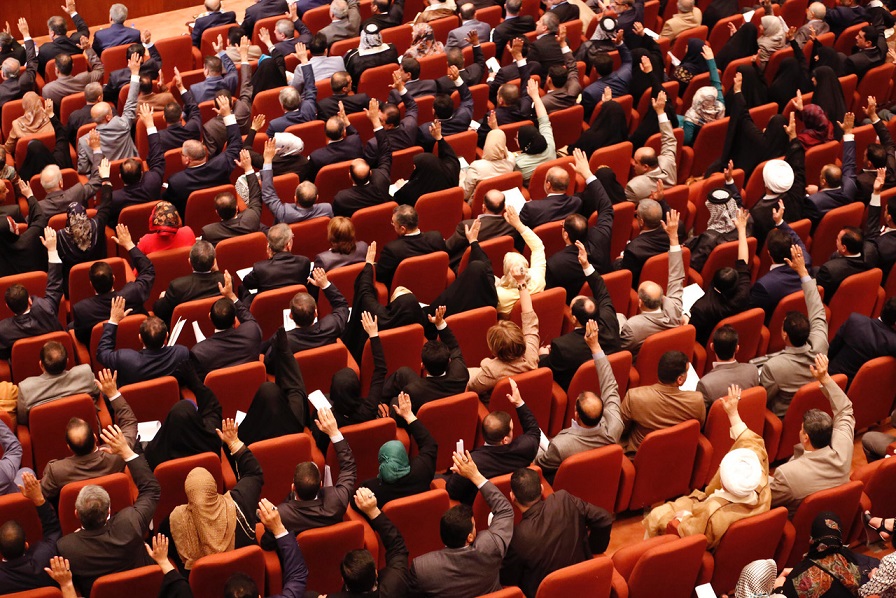 After a series of contentious debates that saw parliamentary blocs withdraw from the chamber over disagreements about revenue sharing, Iraq’s Council of Representatives eventually approved the 2017 federal budget on December 7 in the presence of 189 members.

The 2017 budget reduces government spending by about 5% compared to this year’s budget. Total expenditure has been set at $85.2 billion (100.7 trillion dinars), with the government projecting total revenues to reach $67 billion, based on an average price of $42 per barrel and exports of 3.75 million bpd. The 2016 budget based its projections on 3.6 million bpd at an average of price of $45 per barrel. However, those targets have appeared to be hard to reach, with Basrah crude averaging $41 per barrel in the month of November and exports so far this year have averaged 3.28 million bpd. There is however some cause for optimism next year. November exports reached unprecedented levels with a combined total of 4.051 million bpd across Iraq and according to oil ministry officials, exports are expected to grow at a steady pace through 2017.

The revenue sharing agreement between Baghdad and Erbil has also remained unchanged within the text of the 2017 budget law. The Kurdistan Region is mandated to facilitate the export of 300,000 bpd from Kirkuk fields and a minimum of 250,000 bpd from fields within its own region. In return, the KRG will maintain their 17% share of national spending (minus deductions of sovereign expenses), despite a contentious debate within parliament over whether the KRG’s share should be reduced to reflect the region’s population.  This dispute is reflected in Article 10 of the budget law, which states that the Kurdistan Region’s share should be revised in 2018 after the results of a national census that is scheduled to be completed in 2017.

It is likely that the revenue sharing deal will remain only partially implemented, as was the case throughout 2016. Despite Article 29 of the bill stating that proceeds from any surplus exports from the Federal and Kurdish governments should go to the national treasury, the KRG will no doubt continue their independent exports.  Reports suggest that the Ministry of Natural Resources is currently exporting independently around 580,000 bpd and Baghdad will likely reciprocate by paying only a portion of the 17% share to the KRG.  Article 8(iv) of the budget law is clear that such allocations are proportional to any overall increases or decreases in generated revenues across the country.  As a sign of things to come, as of September this year, Iraq has only earned 67% of projected revenue and executed 57% of expected spending.

The government’s reduced spending plans for 2017 are also reflected in the 2017 deficit, which is projected at $18.4 billion, down from $20.4 billion in 2016’s budget. That represents an important reduction, although a number of significant cuts have been made for the coming year, including a 60% slash in the construction and development projects fund for the regions and provinces, which is down from $1 billion this year to $423 million.

Non-oil revenues have remained stable at around $9.3 billion, equivalent to 14% of total revenues. The 2017 budget introduces some new items that represent a more concerted effort to reduce the financial burden of the public sector, encourage private sector growth and strengthen non-oil streams of revenue. Specifically, these include:

With the investment budget equating to 25.3% of total spending (compared to 24.3% in 2016), the government is relying on $4.7 billion of foreign and domestic loans to support this endeavor. Among the budget’s key investment priorities, the government has secured substantial foreign loans to invest in the country’s power grid for 2017. These include loans from the Japan Bank for International Cooperation worth $50 million, the Islamic Development Bank worth $50 million and a Swedish loan of $500 million.

There is also a focus on infrastructure reconstruction, especially in towns that have been liberated from Daesh. Loans from the Japan Bank for International Cooperation worth $300m and the German KfW bank worth $190 million are particularly prominent.

The budget also reflects the recent passage of a bill that institutionalizes the Hashd al-Shaabi by stipulating in Article 52 the need to cover salaries for their members, in addition to reiterating that recruitment within the Hashd should be representative of communities where military operations have taken place. Furthermore, Article 50 states that salary payments dispersed to members of the Sahwa (Awakening) in Salahaddin, Anbar and other areas should run in parallel with a phasing out of the relevant department by the end of 2017 and the incorporation of Sahwa members into the Iraqi Security Forces and Hashd al-Shaabi.

Overall, the version of the 2017 budget that parliament eventually approved offers some modest attempts to diversify revenue streams although it does little to mitigate the volatility of oil prices for the coming year. Iraq will need to continue to find ways to cut spending if it is to meet its commitments with the IMF. Two key areas to watch out for over the coming months will be the extent to which public sector employees opt to take the 4 years paid leave that is now on offer; in addition to the government’s ability to effectively collect customs tariffs across the country.