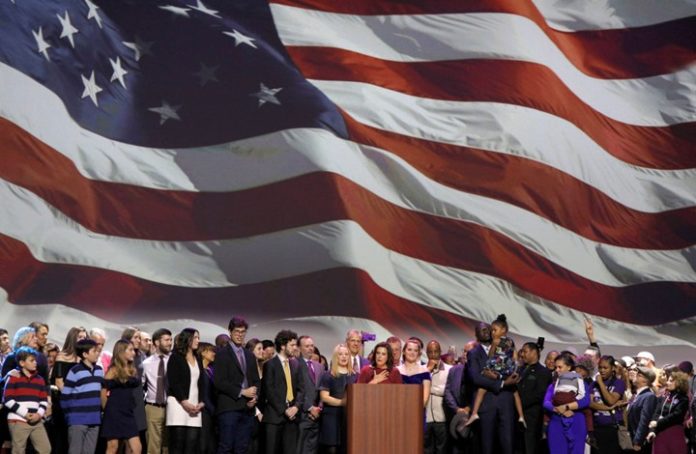 Americans voted on 6 November in the mid-term elections which saw the continuation of a historical trend where the party in opposition gains control of the lower chamber during mid-presidency. The Democrats secured the 218 seats necessary to take control of the 435-member House of Representatives, with the Republicans retaining a majority in the Senate. The elections were seen as a referendum on President Donald Trump and the results suggest that he will face a difficult battle in 2020 to retain the presidency. He did not increase his support nationally, saw his party lose key battleground states to the Democrats, and the election results confirmed two years of polling data on his low approval rating. The new Speaker of the House is likely to be Nancy Pelosi, the former Speaker, who will lead the Democrat effort to challenge Trump and the Republican party in the run-up to 2020. A new field of Democratic Presidential candidates is already forming with former Vice-President Joe Biden the front-runner.

The Democrat gains mean Trump will be more restricted in foreign policy. In fact, the Democrats say they will reverse what they see as a hands-off approach by Republicans toward the President’s foreign policy, and push for tougher dealings with Russia, Saudi Arabia and other countries. They will be in a good position to do this with the influential House Committees seeing new Democrat chairs installed. Three of these, the Armed Forces, Foreign Affairs, and Intelligence committees will help shape US policy on the Middle East and they will be chaired by Democrats who oppose Trump’s stance with regards to Yemen, Syria, Turkey, Saudi Arabia, Egypt, Iran and Russia. The key themes will be attempting to reverse Trump’s support for autocrats in the region, avoiding military build-up and a war posture, and tackling human rights issues.

While the priority issue for the Democrats will be the nature of Trump’s relationship with Russian President Vladimir Putin and sanctions on Russia for interference in US elections, there are several other high-profile foreign affairs items on their agenda. There will be renewed pressure on the US-Saudi relationship with the Democrats critical of Trump’s attitude after the killing of Jamal Khashoggi and US support for the Saudi-led war in Yemen which has led to a humanitarian crisis. A Democratic-led House could vote on legislation to block arms deals with Riyadh or even impose sanctions on Saudi nationals and interests related to the Khashoggi case.