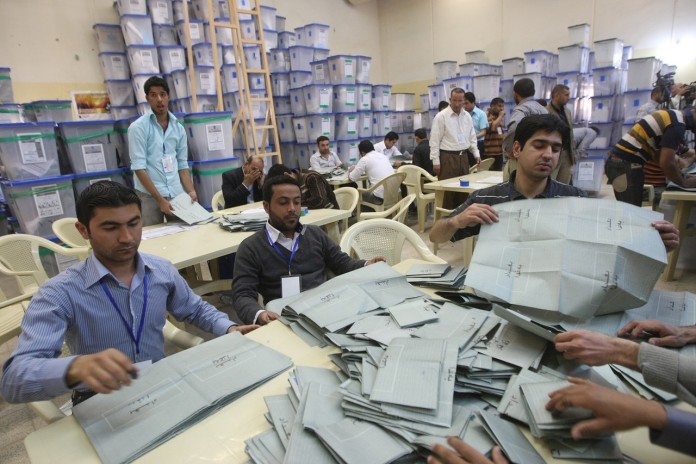 Each electoral cycle, thousands of people in Iraq, including those with little chance of winning, announce their candidacy to run in the elections. 9043 candidates competed for 328 seats in the previous parliamentary election of 2014, which represents about 27 times the number of available seats. This ratio is higher than other countries with similar political and electoral systems. For example, Finland, which has a parliamentary system and proportional representation, had 2146 candidates competing over 200 seats in their parliamentary elections of 2015, which represents 10 times the number of allocated seats.[1]

Proponents of systems featuring a high number of candidates might argue that it has the advantage of reducing competition within a single party by allowing more people to run under the banner of their party. Also, the high likelihood of having candidates share similar identities in each electoral district motivates candidates to be more responsive to the needs of their constituency and limits mobilization that is based purely on sub-identities. For example, if two or more candidates who share the same tribal identity compete in the same district, the one who delivers on his/her pledges is more likely to get re-elected.

However, there are two main disadvantages. First, the high number of candidates leads to a huge waste of valid votes[2], which reached 36% in Wasit province during the 2014 parliamentary election, as appears in Chart I. Wasted votes seem higher in central and southern parts of Iraq due to the large number of lists and the strong support that incumbent parties enjoy.

Chart I. Percentage of wasted votes to valid votes in the 2014 parliamentary elections[3]

Second, it enables candidates without a genuine popular base to secure seats, as evident in previous parliamentary elections, where many candidates were elected despite securing only 3000 to 5000 votes, relying on their list’s total vote share, even though it is assumed that each seat represents 100,000 citizens and the effective threshold was 38,474 votes. Even some small political contestants prefer to compete as a separate list, rather than compete within a coalition of small political parties because of the option of fielding many candidates that enables them to accumulate enough votes to secure at least one seat, because of the absence of a formal threshold and the Sainte-Lague mechanism of seat allocation.

To mitigate these negative aspects, one should understand the factors that lead to high numbers of candidates:

First, the high number of political parties, as exemplified by the 277 registered political contestants in the parliamentary elections of 2014.[4] However, most of these parties allied with other parties to compete as one electoral list, especially those who share the same political platform. Despite issuing the political parties law, the Independent High Electoral Commission announced that 204 registered political parties will compete in the upcoming electoral cycle of 2018. Many critics suggest stricter requirements for registering new parties in terms of increasing registration fees, widening geographic reach of parties, and requiring cross-sectarian membership.

Despite the criticism of many commentators, this phenomenon should also be celebrated given that parties play a crucial role in activating, educating, and mobilizing citizen engagement in political life. Also, it reflects the democratic nature of the political system in Iraq, where any group of Iraqis could establish and register a political party once they meet the regulative conditions enshrined by the constitution and stipulated in the Law of Political Parties. Furthermore, previous elections proved that many lists did not secure even one seat. For example, there were 125 electoral lists that failed to secure a single seat during the 2014 parliamentary elections.

Second, the benefits of candidacy, where most candidates receive sums of money or secure senior positions if their list wins seats. This has been a key motivation for ambitious academics, tribal leaders, businesspeople and religious imams to declare their candidacy and mobilize their social networks to secure short-term benefits, as well as the high likelihood of securing a seat by relying on their list’s votes.

Third, the electoral system, which allows each electoral list to nominate twice as many candidates as there are seats in a given electoral district. It is possible to limit the number of candidates to the number of seats in each district in a way that minimizes wasted votes. However, small parties might object to such reforms because it decreases the likelihood of securing at least one seat. On the other hand, large parties might support it, given the fact that they tend to form coalitions and distribute the number of candidates among the different political parties that constitute each coalition.