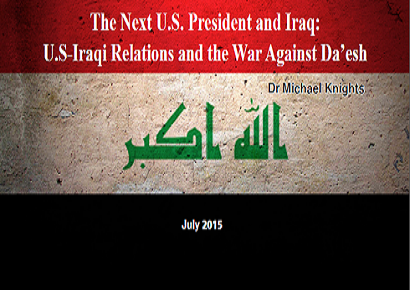 The next President of the United States will take office in January 2017 and will likely preside over a “make-or-break” moment in U.S.-Iraqi relations. The presidential contenders will all advocate a more aggressive campaign against Da’esh in Iraq and most of them support an effort to reduce Iranian influence in Iraq as well, albeit without a detailed idea of how to achieve either outcome. Intensified use of U.S. special forces and airpower is likely to be offered by the next U.S. president but there is no consensus regarding other U.S. policy options. It is quite possible that Washington-Baghdad relations will have deteriorated to the point that the next president does not attempt to repair the relationship, with the United States balancing its commitment to Baghdad with intensified cooperation with the Kurdistan Region as a counter-terrorism ally. Washington will persist in calling for Baghdad to support a second Sunni Arab “awakening” in Iraq, though without providing stronger direct support to Sunni paramilitaries.
Though there are some party political differences on policy options in Iraq – with Republicans more hawkish and Democrats less inclined to commit U.S. effort –the most likely “establishment” candidates for president look set to continue a slightly more aggressive version of Obama-era policies on Iraq.