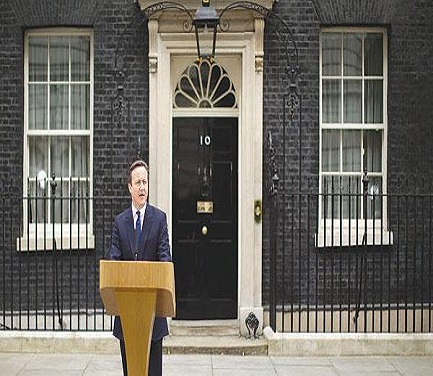 At 12.30pm on Friday 8 May 2015 the Conservative Party leader and current UK Prime Minister David Cameron entered Buckingham Palace to meet with Queen Elizabeth II. She asked two simple questions: ‘do you have the confidence of parliament’ and ‘do you intend to form the next government’ and the replies to both were yes. This scene was totally unexpected, with the Queen in Windsor until the morning and not planning to be London, as all polls and even politicians had expected days of negotiations between party leaders another coalition government. Nobody thought the Conservative Party would win the elections, not even the Conservatives themselves, but their very small majority in parliament brings several challenges and will have massive impact on domestic and foreign policy.

Several reasons led to the Conservative victory, among them the large advantage in funding, greater support from the media, the lack of public support for opposition leader Ed Miliband, the weakness of the Liberal Democrats, and the huge win by the SNP in Scotland which took most of the seats from Labour, but mostly it was the fact the economy had improved significantly which allowed voters to trust the Conservatives with running the country.

Most opinion polls had the Conservative and Labour parties tied going into the elections, meaning neither could govern on their own without forming allies. As it happens David Cameron achieved the rare feat of increasing the number of seats for a sitting government, something last achieved by Margaret Thatcher in 1983. He now has 331 MPs which means a majority in parliament of 12 technically but in reality this may increase or decrease on each major vote or with the passage of time as by-elections appear. The last Conservative government of John Major in 1992 started with a majority of 21 but this disappeared quickly and the breakdown of party discipline was one factor behind Labour’s landslide win in 1997.

Having a majority means Cameron can pursue his election manifesto much more freely than in 2010 and that there are more ministerial posts available that he can offer to allies and enemies. This will be crucial for two reasons: firstly voters have shown that they will not forgive a party that breaks promises (as with the Liberal Democrats over the tuition fee rises) and secondly that Cameron has got to win over dozens of MPs in his own party who are critical of his policies, as he cannot rely on a coalition partner to support him with votes as happened in the previous government.

Cameron will continue to pursue austerity measures, believing that the election results are public approval for his economic policies. A firmer line on immigration, welfare spending, and reducing borrowing will also be taken over the next 5 years. These will please the right-wing elements within the party that had complained bitterly about the threat of the UK Independence Party, who are now the third largest party by vote share, to Conservative votes.

The two major challenges Cameron faces are Scotland and the EU. The Scottish National Party, who pushed strongly for independence last year in the referendum, now controls Scotland and with Labour controlling Wales, this means that the Conservative party has essentially become an English party only. The strength of the SNP’s victory in Scotland, though it may not trigger another independence referendum in the coming years, means that Cameron will have to appease them in some issues, as Westminster will have very little power in Scotland. This will of course be controversial and could lead to de-facto autonomy for Scotland, another step towards the break up of the UK.

A referendum on membership of the EU in 2017 was promised by Cameron in the manifesto and the euro-sceptic wing in the Conservative party will work very hard to ensure the result of that is the UK leaving the EU. Already EU politicians have said they are willing to work with Cameron on renegotiating the UK’s membership in the EU in order to keep the UK in it, but this will likely be the toughest political challenge he faces over the next five years: how to keep the UK in the EU, under new terms of membership, and ensure that he does not lose the referendum that many in his party want him to.

One key absence from the election campaign was the role of foreign policy, other than the EU issue of course. Realising that he had lost a vote on direct military action in Syria, and that the electorate still feels cheated over the Iraq war, Cameron wisely avoided the Middle East altogether. In fact, there was no significant mention of any foreign policy in the manifesto, meaning that Cameron is freer to form a policy now and also that keeping the UK out of foreign disputes is the safer way to go. The threat posed by extremist terrorists will mean the UK continues its current engagement and obligations abroad, but voters have shown that domestic policy is far more important to them, and that whatever the UK does abroad nearly always ends up making things worse.

As such, it is highly unlikely that Cameron will make any gambles on foreign policy, but he will continue to ensure that the UK will have an important voice alongside the US. The relationship with the Gulf countries is particularly important for the UK, so Middle East policy will continue to be based on that. The UK has little interest in Africa at the moment as it is mostly looking to work with countries that can benefit it economically. Elsewhere we can expect a status quo, and if a new international emergency appears the UK will simply follow the US line, though commit far less resources.