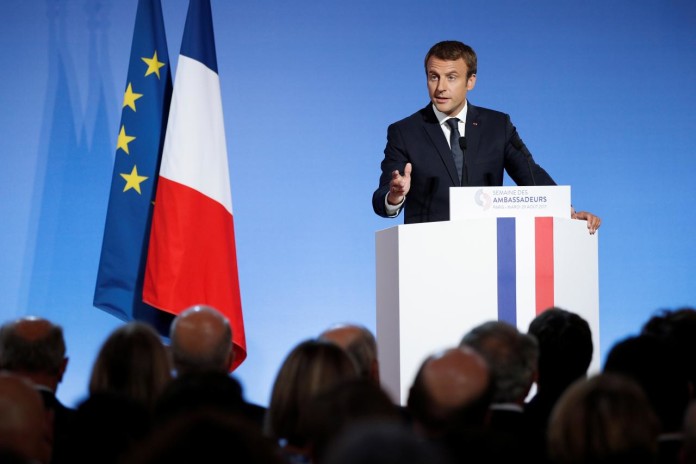 In a recent interview for Shafaqna News Association, Denis Bauchard, Adviser for the Middle East at the French Institute of International Relations (Ifri) made rather clear that France’s position and interests towards the Greater Middle East have more to do with direct national necessity and security than an inherent need to direct over the region’s future.

France, the former diplomat notes has a stake in the region on geography alone. Beyond that he explains, France is home to communities hailing from the Middle East, thus making the 5th Republic more susceptible to negative developments. One might even argue a certain case of geopolitical codependency, whereas France has grown to rely on its ability to project influence in the region to secure the expression of its own sovereignty.

Bauchard emphasises: “Geographically France is of course very close to both Africa and the Middle East and that means that it is directly impacted by developments in those regions. Anything that happens in the ME and Africa is a matter of national interest for France. This is a reality which will not change. France has a stake in those regions, if anything out of self-preservation.”

To put it plainly, France cannot afford for the region to fall into complete chaos without standing to disappear the integrity of its borders and socio-political equilibrium. From a purely economical perspective France very much depends on its former colonies to prop its markets, and infuse wealth into its national economy.

Unlike the United States that enjoys the luxury of an ocean to act a buffer to its hegemonic adventures, France needs greater consistency, and most importantly continuity.

That reality alone makes France a more valuable protagonist, if not partner.

And though arguably France did, over the past decade, act counter-intuitively to its own national interests for the sake of its strategic partnership with the United States, the rise of sectarian-based radicalism in the Greater Levant, and the subsequent backlash witnessed in Europe’s streets, as well as great financial losses (Libya) led to a profound political shift – which shift has been crystallized by President Macron’s 3D foreign policy mantra: Diplomacy, Development, Defense.

“Today, thanks to the efforts of all the nations involved, the Daesh military organisation in the Levant is almost completely defeated,” Macron said in a speech aboard a helicopter carrier in the southern port of Toulon. “I’m confident that in the coming weeks we will achieve a military victory on the ground. I want us now to firmly commit with our partners to stabilisation, reconstruction and aide to populations” after years of conflict,” he noted.

President Macron’s comments carry much more than an offer of renewed cooperation, they imply the acknowledgement of a new geopolitical reality – away from the old binaries Washington has been keen on projecting to support its worldview.

Confirmation of such ‘shift’ in policy, or maybe more accurately tone, came by way of military disengagement this January when France pulled out two of the 12 Rafale fighter jets it had been operating in the region..

Macron also said that although combat operations would continue, the country would “adapt” its contribution this year to developments.

But what does France mean, and more to the point how will its influence be felt in the region?

There is one aspect so far of geopolitics which has been grossly overlooked and that is food geopolitics.

It seems difficult today to ignore the importance of agriculture and nations’ ability to access food and water if we consider how both, or the lack thereof, have been exploited as asymmetrical weapons of war. In Syria for example, Daesh used hunger to force communities into submission, while in Yemen, other countries have argued a humanitarian blockade to suffocate all resistance to its diktat.

The Greater Middle Eastern region acts today a magnifying glass to our global agricultural and food challenges. France, more than most of its western counterparts, understands that the absence of a long-term vision coupled with military instability will only exacerbate social insecurities on its very doorstep – something France is not exactly keen on allowing, especially since food shortages will most likely translate into yet another migration influx.

When it comes to promoting agricultural development to sustain socio-political stability France has a wealth of experience. Founded in 1962, the CIHEAM,  a Mediterranean intergovernmental organisation devoted to the sustainable development of agriculture and fisheries, food and nutrition security and rural and coastal areas has developed a potent model.

Macron’s new approach in the Middle East is likely to include food geopolitics.

To reduce events in the Greater Middle East, and more particularly Iraq and Syria as both countries bore the brunt of Daesh’s violence, to a simple case of sectarian-based radicalism is dangerously simplistic.

One cannot underestimate the role played by food, water, and agriculture in the region’s ongoing political remapping.

Pierre Blanc, an expert in food geopolitics believes that “land and water are to be included in our analyzes to better understand certain behaviors, dynamics or risks.”

Blanc warns that unlike France at the end of WW2 which sought solidarity to solve its food insecurity crisis, the Greater Middle East has seen the eruption of “hyper-localised conflicts.”

France’s experience could prove beneficial to all protagonists. More pertinently, food geopolitics could serve as a catalyst for a real political detente vis a vis not only France but Europe by allowing ‘solidarity’ to become the new political denominator.